Bienvendos Mezcal Vago!  Sometimes it’s the journey we take off the beaten path that leads us to our destiny.  And for Mezcal Vago founder Judah Kuper – a self-described ski bum from Colorado – a little trip to paradise, a good ass kickin’ and a new love was only the beginning.

Want to know how a Colorado local managed to create an incredible Mezcal? Read more!

Kuper’s paradise was a rural island in Mexico west of Puerto Escondido, where he and his buddy Dylan Sloan spent their days surfing and operating a beachside bar. An unexpected ear infection led him to a chance encounter with Valentina, a local nurse – and the rest is history! Kuper and Valentina fell in love and began to build a life together. Valentina comes from the southern Mexico state of Oaxaca where her family has been crafting mezcal for hundreds of years, in the hills above her hometown. As Kuper became part of his new wife’s family, he discovered that Valentina’s father Aquilino, a fourth-generation mezcalero, was crafting some of the finest mezcals he had ever tasted. Awestruck by Aquilino’s skill and craft, Kuper began journeying across Oaxaca to search out other undiscovered mezcals and the families who make them. Along the way, he built his knowledge and expanded his palate in order to fully appreciate this ancient spirit. He launched Mezcal Vago in 2013 with his old friend Dylan to bottle the special mezcals they discovered in Oaxaca’s remote mountain villages, crafted by master mezcaleros who now have the opportunity to share their mezcals with the world. And the ass kickin? That happened to Kupar when the man Valentina was supposed to marry showed up on the island one day and discovered she was being romanced by a gringo. Kuper definitely got beat up and he definitely lost the fight, but in the end he won Valentina’s heart.

Each of Vago’s unique mezcals are naturally made in a traditional palenque (a rustic type of mezcal distillery) with no additives. The label on each bottle provides information about who made it, what village, what agave, details about the process, size of the batch and more.  This empowers the master mezcalero with a recognition of his art and craft, and also the consumers by giving them the knowledge they need to identify a great mezcal. All of Vago’s mezcals are joven (young) and clear. This is connoisseur mezcal. 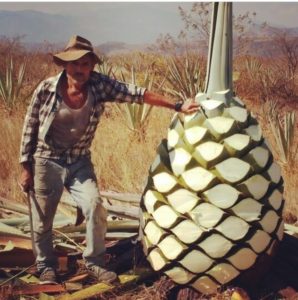 Mezcal Vago began with Aquilino, the father-in-law of founder Judah Kuper. Aquilino’s family has been making mezcal for more generations then they can remember, cultivating agave plants in the hills above a small village located on the border of the Central Valley and Sierra Sur regions of Oaxaca.  This location is an arid region, yet sits on the confluence of two rivers. The dry environment – coupled with ample fresh water – make it an ideal location for making mezcal.

During the production process, Aquilino distills his fermented mash before all of the sugar has fermented, a technique not common among other mezcaleros.  He double distills his mezcal in an alembic copper still, making all the separations (cuts) by smell and taste. All of these elements create bright, clean and bold mezcals without too much smoke.  They have less bottom end (tails) than other mezcal lines, due in part to Aquilino’s “narrow” cuts on the still.  This really lets the subtle notes of the agave shine through on the front end of the palate. At Bone Garden Cantina, we currently offer two of Aquilino’s mezcals, the Espadin and Elote:

Mezcal Vago’s Espadín has become a favorite here – its well-balanced smokiness and bright citrus flavors make it perfect for sipping. We are also experimenting with cocktails that will allow its flavor profile to shine. Every batch is slightly different, but ABV is usually around 50%.

This is arguably the most unique mezcal available at Bone Garden Cantina. For this special recipe created by Aquilino’s family, Aquilino takes a batch of his double distilled espadín and naturally infuses it with roasted corn (translation: elote) that he grows on his farm. Aquilino then sends the corn-infused mezcal through a third distillation. This Elote mezcal has a nose full of smoky toasted corn and dry river stones.  And the body is sweet with wood tones and layers of honeycomb, green tropical fruit, and smoke. 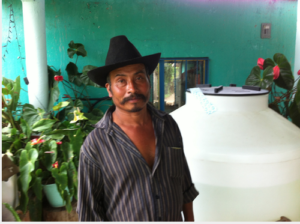 Salomón Rey Rodriguez (a.k.a. Tio Rey) crafts his mezcal in Sola De Vega, a region famous for its use of olla de barro (clay pots) in distillation. Distilling in clay pots is an ancient, slow technique that is rare in today’s mezcal production.  Tio Rey cultivates many different agave types on his property.  His palenque sits ideally on a fertile hill near a fresh mountain spring. This water source combined with the soil, variety of agaves, and the traditional methods he uses yield rich and satisfying mezcals. 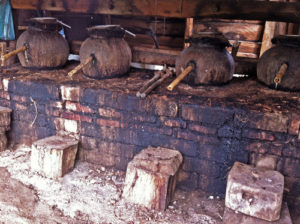 “Ensamble” means a mix of agave plants (rather than a single variety) and “en barro” means that the mezcal is distilled in clay pots.  Tio Rey crafts this unique mezcal by selecting different types of agaves based on which plants are ripe at the time and what he thinks will meld well together.  So the Ensamble en Barro is similar to a “field blend,” where the exact ratio of agave types in a batch will never be repeated.  The blends include various amounts of Espadin, Mexicano, Tobala, Coyote, Arroqueño and Sierra Negra agave.  All the agave types are cooked, crushed, fermented, and distilled together.  The percentages of the agave types listed on the label are the dry weight of the agave hearts (or piñas)  before they are roasted underground. Because each batch is a unique blend, these mezcals are like individual works of art with singular flavor profiles. They are also educational, because you can analyze different flavor variances alongside different agave ratios.  As of February 2017, we are selling a batch distilled on March 2016 comprised of 84% espadin agave and 13% coyote agave. 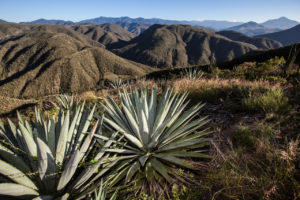 Which Mezcal Vago do you think will be your favorite?  Hasta pronto! 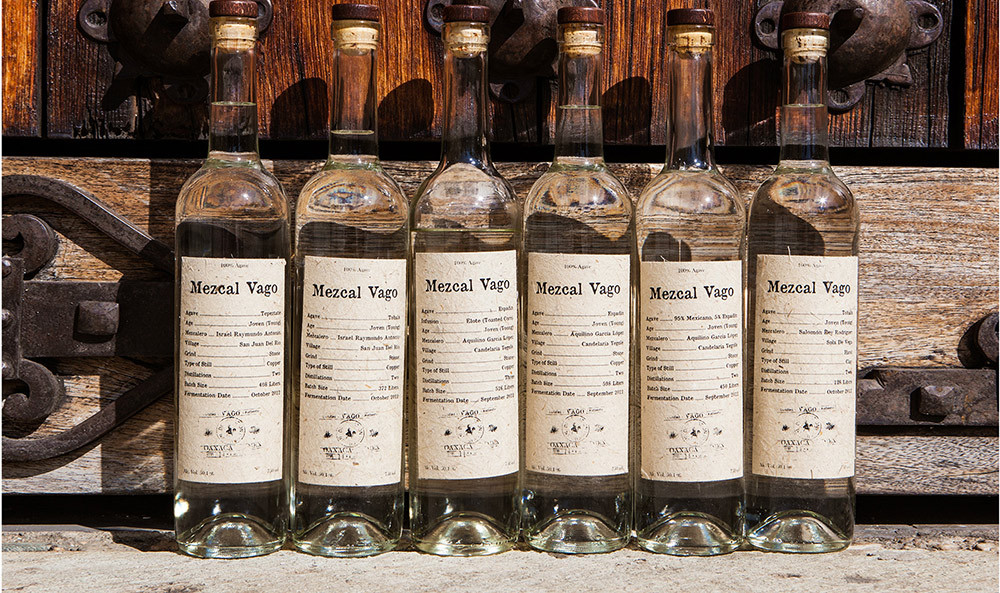