Meet me in Oaxaca – The Land of Seven Molés!  Nestled in southern Mexico, Oaxaca is a diverse state filled with a rich history and ancient culture.  And with seven geographical regions, that diversity can be experienced in the varied cultures, indigenous peoples, languages, and of course – food!

Based on staples like corn, beans, and chili peppers, Oaxaca boasts a seemingly endless list of traditional dishes. During our trips to Oaxaca, we often have the most memorable food experiences off the beaten path – in the remote mountain villages we have visited while on the hunt for mezcal. A little cup of homemade hot chocolate, a villager preparing carnitas in his yard, a traditional negro mole cooked by a sweet abuela who loves her iPhone, and the best outdoor kitchen we’ve ever seen with all the dishes cooked over fire. These are just a few of our favorite culinary memories.

We’ve put together a brief guide to several of the traditional dishes that are special to Oaxaca.  Ready to learn a little more about this delicious cuisine?  Grab ya forks!

Mole
Mole! Mole! Mole!  Most notable of all Oaxacan foods is arguably the mole.  With over 200 known preparations, seven distinctive sauces have earned the southern state the nickname Land of the Seven Moles, with each of the state’s seven regions producing a unique variation of the spicy mole sauce.  All mole preparations begin with one or more types of chili pepper, and a host of other ingredients from black pepper, achiote, cumin, cloves, anise, tomatoes, tomatillos, garlic, and more.  The ingredients are then roasted and ground into a fine powder or paste, mixed with a broth, and simmered until thick. Making mole from scratch is a very time-consuming labor of love, from collecting the many spices and seasonings needed to the prep and slow-cooking. We do make mole at Bone Garden Cantina… because we love you.

Chocolate
“In Oaxaca, chocolate is more than history.  It signifies the binding of a pueblo to its roots and to the belief that the divine (sacred) purifies, gives new force to, and celebrates life.” -Diana Kennedy, from the cookbook Oaxaca al Gusto. Not that anyone needs a reason to justify their love of chocolate, but just saying. Oaxaca has a long history with cacao bean, and was even the first source of chocolate brought over to Europe. One of our favorite streets in the heart of Oaxaca City is Mina Calle, which we lovingly refer to as “Chocolate Street.” Here, there are tons of shops selling cacao beans ground to order and handmade chocolates.  One of Oaxaca’s lesser known culinary treats is tejate, a cold chocolate drink.  Made with a paste of toasted maize, fermented cacao beans, toasted mamey pits (pixtle) and flor de cacao, the paste is mixed with water.  And when it is ready, the flor de cacao rises to the top to form a pasty foam.

Tlayudas
One of our favorite discoveries in Oaxaca is the homemade Tlayuda. This iconic Oaxacan street snack looks similar to a pizza, but is made with a large, thin, toasted tortilla that is like a crispy masa flatbread. It’s cooked on a comal or a charcoal or wood-fired grill, and covered with a spread of black bean puree, asiento (unrefined pork lard), cabbage or lettuce, avocado, meat and stringy Oaxacan cheese. They are often folded like a quesadilla so they’re easy to eat in a market or at a street stand. We prepare a version at Bone Garden that we feature regularly as a weekly special. Be sure to check out our easy recipe to make your own.

Tamales
Traditionally, tamales are made of corn masa (a starchy dough), which is steamed in a corn-husk or banana leaf. They are filled with a variety of meats, cheeses, vegetables, or chilies.  In Mexico there are all kinds of tamales.  And while they are made with the same basic ingredients, each state, region and puebla can have their own traditional version. Oaxaca is known for tamales wrapped in banana leaves.  We make a banana leaf tamale at Bone Garden Cantina, filled with seasoned pork. We call it the Azteca, and eating it is almost like being in Oaxaca! Mmm…

Chapulines (BBQ Grasshoppers)
Little serving bowls full of crunchy chapulines are found on the dining table in most homes and restaurants, and served up as snacks at bars and sporting events. They are one of the most common condiments served with meals, and are especially popular for sprinkling on guacamole for extra flavor, texture and protein! These tiny grasshoppers are collected from their hatching in early May through the late summer/early fall.  They are then washed and toasted on a comal (clay cooking surface) with garlic, lime juice and salt – which gives them a sour-spicy-salty taste.  Yum yum!

Hungry yet?  When it comes to Oaxacan cuisine, there’s an endless amount of dishes to explore.  If you’re feeling experimental, don’t forget to check out our easy recipe for Tlayudas! 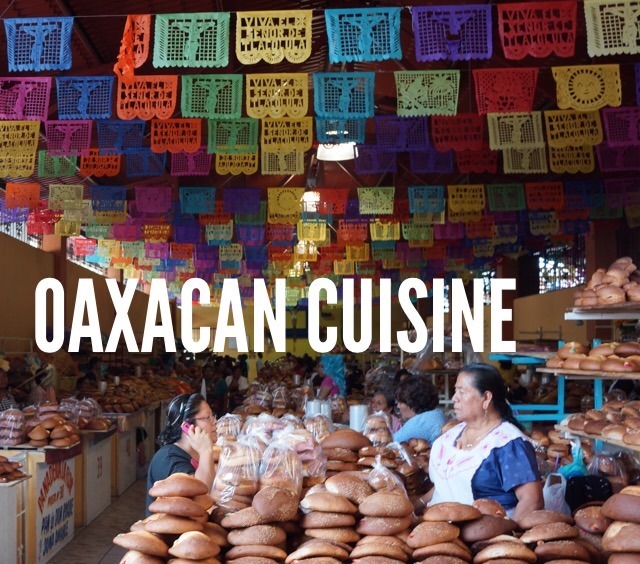